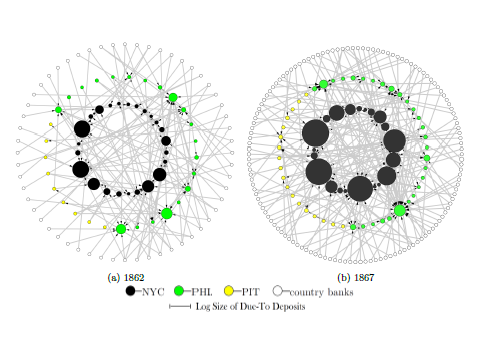 This paper uses unique data to analyze how the national banking acts in 1863 and 1864 reshaped the U.S. bank network in the 1860s. The laws concentrated reserves in New York and regional cities, creating systemically important banks. The paper shows this concentration made contagion more likely if big banks faced economic shocks. (Working Paper no. 16-13)

The reserve requirements established by the National Banking Acts (NBAs) dictated the amounts and locations of interbank deposits, thereby reshaping the structure of U.S. bank networks. Using unique data on bank balance sheets, along with detailed interbank deposits in 1862 and 1867 in Pennsylvania, we study how the NBAs changed the bank network structure. Further, we quantify the effect on financial stability in a model of interbank networks with liquidity withdrawal. We find that the NBAs led to a concentration of interbank deposits at both the city and the bank level, creating systemically important banks in major financial centers. Our quantitative results show that the newly emerged system was “robust-yet-fragile” – while the concentration of linkages made the system more resilient in general, it increased the likelihood of contagion when financial center banks faced large shocks.