Stopping Contagion with Bailouts: Microevidence from Pennsylvania Bank Networks During the Panic of 1884

By John Bluedorn and Haelim Park 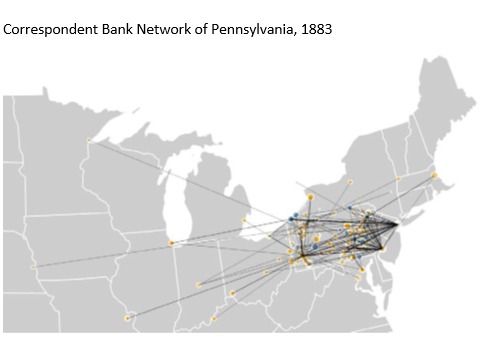 This working paper examines how a bailout orchestrated by New York Clearinghouse member banks stopped financial contagion during the Panic of 1884. The private-sector assistance to Metropolitan National Bank, an important correspondent bank for many banks outside New York City, prevented a minor financial crisis in New York from becoming a broad, systemic event, according to the authors’ analysis. (Working Paper no. 16-03)

Using a newly constructed historical dataset on the Pennsylvania state banking system, detailing the amounts of “due-froms” on a debtor-bank-by-debtor-bank basis, we investigate the effects of the Panic of 1884 and subsequent private sector-orchestrated bailout of systemically important banks (SIBs) on the broader banking sector. We find evidence that Pennsylvania banks with larger direct interbank exposures to New York City changed the composition of their asset holdings, shifting from loans to more liquid assets and reducing their New York City correspondent deposits in the near-term. Over the long-term though, only the lower correspondent deposits effect persisted. Our findings show that the banking turmoil in New York City impacted more exposed banks outside New York City, but that bailouts of SIBs by the New York Clearinghouse likely short-circuited a full-scale banking panic.