By Ram Yamarthy and Ron Alquist

Views and opinions expressed are those of the authors and do not necessarily represent official positions or policy of the OFR or Treasury.

The March 2020 stress on the U.S. Treasury market raised questions about the role of hedge funds in the financial system and whether their activities can increase systemic risk. Using a sample of regulatory hedge fund data that spanned eight years, Ram Yamarthy and Ron Alquist found that hedge funds play a significant and consistent role in influencing the U.S. Treasury yield curve alongside other market players and forces. Their findings were published in a recent OFR working paper, Hedge Funds and Treasury Market Price Impact: Evidence from Direct Exposures.

In March 2020, a steep flight to the safest, most liquid assets led to Treasury market volatility that widened the Treasury cash-futures basis, the price difference between cash Treasury securities, and futures contracts on similar securities. While relative value hedge funds try to profit off of temporary differences on similarly yielding securities, the widening forced a number of these funds to unwind their positions, causing additional market instability. Some market commentators also suggested that risk parity and short volatility funds cut back on their positions in response to market volatility. This behavior may have exacerbated the equity market turmoil.

While there is indirect evidence suggesting there was U.S. Treasury selling pressure by hedge funds in March 2020, evidence on the general correlation between hedge fund exposures and U.S. Treasury yields is harder to infer. In the working paper, the authors tackled this issue by seeking to estimate the price impact of hedge funds. Based on fund-level balance sheet information from the SEC Form PF, the authors computed total, net notional exposures to Treasuries (e.g., cash bond and derivative positions) across the industry and focused on their fluctuations over time.

Through a monthly analysis from 2013 through 2020, the authors found economically significant and consistent evidence that changes in hedge fund exposures are related to yield changes. For example, a one standard deviation increase in net Treasury exposures (a $41 billion monthly movement) is significantly associated with a 6.2 basis point decline in bond yields. The size of this estimate takes into account well-known macroeconomic drivers, such as inflation, and exists at various maturities. The results are also robust in controlling for the valuation effects of yields on exposures, changes in the Treasury demand of other financial intermediaries, and the effects of U.S. monetary policy. See the figure below for bond yield sensitivities by maturity. 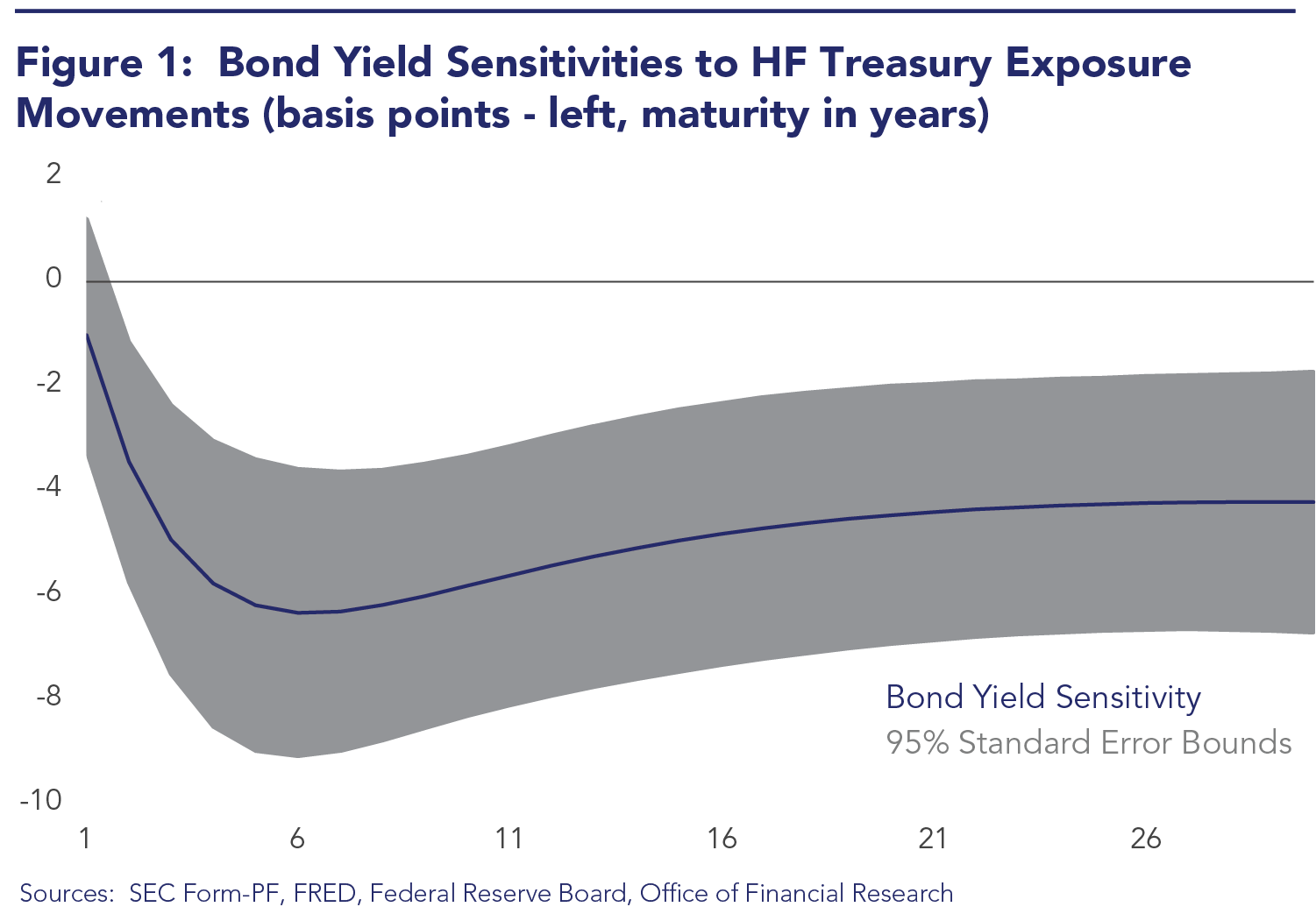 Using data related to the cross-sectional characteristics of hedge funds, the authors found that movements in net U.S. Treasury exposures of managed futures and multi-strategy funds have the most significant price impact. Meanwhile, relative value funds are relatively negligible along this dimension. With respect to leverage, the authors found that funds with higher ex-ante leverage have an insignificant asset pricing effect in Treasury markets. This latter finding is surprising from the canonical risk viewpoint that higher leveraged funds can lead to more volatile market behavior. However, the authors found the opposite.

Finally, the authors contextualized the behavior of hedge funds in March 2020 in the study. Among other findings, the study shows that this period was not a sizable event when examining movements in net, as opposed to gross, positions. The authors also studied hedge fund demand as an aggregate risk factor and provided evidence that it is positively priced across Treasury risk assets.

In summary, the authors found a significant association between movements in hedge fund U.S. Treasury demand and the term structure of bond yields. While hedge funds are not the sole or decisive driver of U.S. Treasury price fluctuations, they certainly play an economically significant and consistent role alongside other market players and forces.