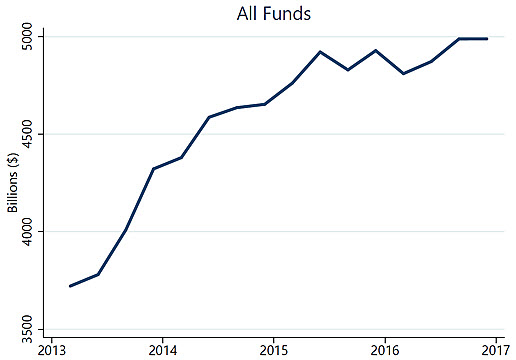 This paper shows that hedge fund industry gross assets exceeded $8.3 trillion, and net assets were at least $5.0 trillion, at year-end 2016. This estimate is around 37 percent larger than the next largest estimate. This paper also shows that funds reporting publicly available data have much lower returns, and much higher net flows, than funds reporting only non-public regulatory data. The outperformance of the non-publicly reporting funds appears to arise entirely from alpha rather than greater exposure to systematic risk factors. (Working Paper no. 20-01)

Of first-order importance to the study of potential systemic risks in hedge funds is the aggregate size of the industry. The worldwide hedge fund industry has been estimated by regulators and industry experts as having total net assets under management of $2.3–3.7 trillion as of the end of 2016. Using a newly combined database of several hedge fund information vendors, augmented by the first detailed, systematic regulatory collection of data on large hedge funds in the United States, we estimate that the worldwide net assets under management were at least $5.0 trillion in 2016, around 37% larger than the most generous estimate. Gross assets, which represent the balance sheet value of hedge fund assets, exceed $8.3 trillion. We further decompose hedge fund assets by their self-reported strategy and by fund domicile. We also show that the total returns earned by funds that report to the public databases are significantly lower than the returns of funds that report only on regulatory filings, both in aggregate and within nearly every fund strategy. This difference appears to be driven entirely by alpha, rather than by differences in exposures to systematic risk factors. However, net investor flows are considerably higher for funds reporting publicly. Regression results show that previous estimates of the flow-performance relationship are likely biased. Our new, and much larger, estimates of the size of the hedge fund industry should help regulators and prudential authorities to better gauge the systemic risks posed by the industry, and to better evaluate potential data gaps in private funds.
Keywords: Hedge funds, net assets, gross assets, strategy, domicile, returns, flows
JEL Classifications: G23, G28