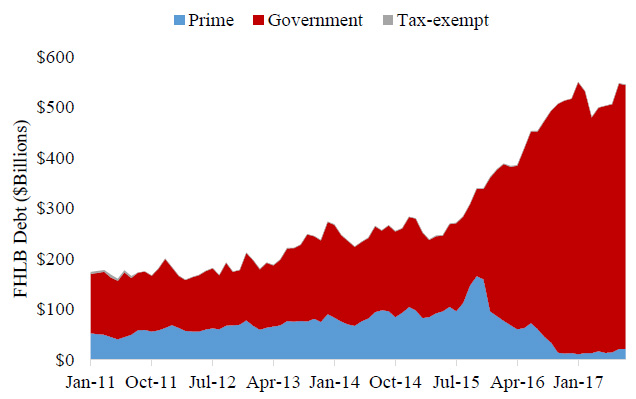 The most recent changes to money market fund regulations have had a strong impact on the money fund industry. In the months leading up to the compliance date of the core provisions of the amended regulations, assets in prime money market funds declined significantly, while those in government funds increased contemporaneously. This reallocation from prime to government funds has contributed to the latter’s increased demand for debt issued by the U.S. government and government-sponsored enterprises. The Federal Home Loan Bank (FHLBank) System played a key role in meeting this heightened demand for U.S. government-related assets with increased issuance of short-term debt. The FHLBank System uses the funding obtained from money market funds to provide general liquidity to its members, including the largest U.S. banks. Large U.S. banks’ increased borrowings from the FHLBank System are motivated, in large part, by other post-crisis regulations, specifically the liquidity coverage ratio (LCR). The intersection of money market mutual fund reforms and the LCR have contributed to the FHLBanks’ increased reliance on short-term funding to finance relatively longer-term assets, primarily collateralized loans to its largest members. This funding model could be vulnerable to “runs” and impact financial markets and financial institutions in ways that are difficult to predict. While a funding run seems unlikely, it is often the violation of commonly held conventions that tend to pose financial stability risks. Indeed, runs on leveraged financial intermediaries engaged in maturity transformation have produced systemic risks issues in the past and are worthy of investigation and continuous monitoring.