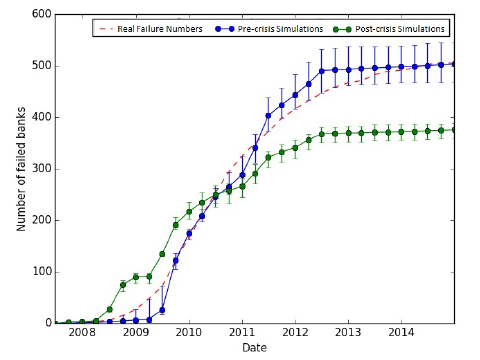 The authors create an agent-based model that can help regulators understand risk in the interbank funding market. Tests of the model against actual bank failures before, during, and after the 2007-09 financial crisis suggest that the market has become more resilient to asset write-downs and liquidity shocks. The model uses balance sheet data from more than 6,600 U.S. banks. (Working Paper no. 16-14)

The potential impact of interconnected financial institutions on interbank financial systems is a financial stability concern for central banks and regulators. A number of algorithms/methods have been developed to extrapolate latent interbank risk exposures. However, most use highly stylized network models and reconstruction methods with global optimality lending allocation approaches such as maximizing entropy or minimizing costs. This paper argues that U.S. bank lending and borrowing decisions are largely suboptimal and performance-driven. We present an agent-based model to endogenously reconstruct interbank networks based on 6,600 banks’ decision rules and behaviors reflected in quarterly balance sheets. The model formulation reproduces dynamics similar to those of the 2007-09 financial crisis and shows how bank losses and failures arise from network contagion and lending market illiquidity. When calibrated to post-crisis data from 2011-14, the model shows the banking system has reduced its likelihood of bank failures through network contagion and illiquidity, given a similar stress scenario.