Contagion in the CDS Market 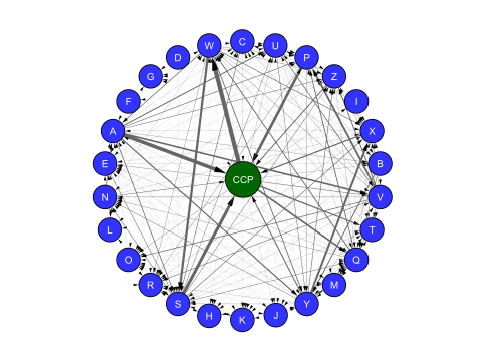 This paper assesses the risk of contagion in the credit default swap (CDS) market. This risk emerges through the inability of CDS counterparties to make payments during systemic stress. The authors find that the central counterparty contributes significantly less to network contagion than do several peripheral firms that are large net sellers of CDS protection. (Working Paper no. 16-12)

This paper analyzes counterparty exposures in the credit default swaps market and examines the impact of severe credit shocks on the demand for variation margin, which are the payments that counterparties make to offset price changes. We employ the Federal Reserve’s Comprehensive Capital Analysis and Review (CCAR) shocks and estimate their impact on the value of CDS contracts and the variation margin owed. Large and sudden demands for variation margin may exceed a firm’s ability to pay, leading some firms to delay or forego payments. These shortfalls can become amplified through the network of exposures. Of particular importance in cleared markets is the potential impact on the central counterparty clearing house. Although a central node according to conventional measures of network centrality, the CCP contributes less to contagion than do several peripheral firms that are large net sellers of CDS protection. During a credit shock these firms can suffer large shortfalls that lead to further shortfalls for their counterparties, amplifying the initial shock.