By Jill Cetina and Bert Loudis 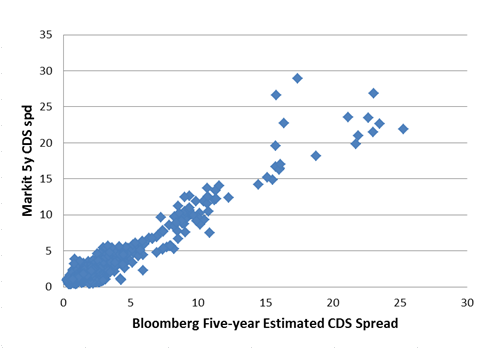 This paper examines credit default swap (CDS) spreads in a sample of international banks for evidence of a benefit related to possible measures of systemic importance. The authors find a consistent, statistically significant negative relationship between five-year CDS spreads of banks and nine different systemic importance indicators. The paper shows that the benefit is most pronounced for banks within a certain asset range. Such evidence is weaker for banks identified by regulators as global systemically important banks. (Working Paper no. 15-09)

This paper examines the relationship between banks’ observed credit default swap (CDS) spreads andpossible measures of systemic importance. We use five-year CDS spreads from Markit with an international sample of 71 banks to investigate whether market participants are giving them a discount on borrowing costs based on the expectation that governments would consider them “too big to fail.” We find a consistent, statistically significant negative relationship between five-year CDS spreads and nine different systemic importance indicators using a generalized least squares (GLS) model. The paper finds that banks perceived as too big to fail have CDS spreads 44 to 80 basis points lower than other banks, depending on the asset-size threshold and controls used. Additionally, the study suggests market participants pay more attention to asset size than to a more complex measure, such as designation as a globally systemically important bank (G-SIB), that includes additional factors, such as substitutability and interconnectedness. Lastly, the model suggests that asset size acts as a threshold effect, rather than a continuous effect with the best fitting models using asset-size thresholds of $50 billion to $150 billion.