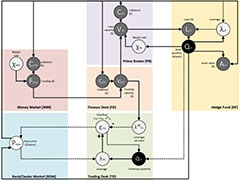 This paper demonstrates the value of signed directional graphs, a modeling methodology used for risk detection in process engineering, in tracing the path of potential instabilities and feedback loops within the financial system. This approach expands the usefulness of network models of the financial system by including critical information on the direction of influence and the points of control between the various nodes of the network. (Working Paper no. 15-01)

Financial instability often results from positive feedback loops intrinsic to the operation of the financial system. The challenging task of identifying, modeling, and analyzing the causes and effects of such feedback loops requires a proper systems engineering perspective lacking in the remedies proposed in recent literature. We propose that signed directed graphs (SDG), a modeling methodology extensively used in process systems engineering, is a useful framework to address this challenge. The SDG framework is able to represent and reveal information missed by more traditional network models of financial system. This framework adds crucial information to a network model about the direction of influence and control between nodes, providing a tool for analyzing the potential hazards and instabilities in the system. This paper also discusses how the SDG framework can facilitate the automation of the identification and monitoring of potential vulnerabilities, illustrated with an example of a bank/dealer case study.