Concentrated Capital Losses and the Pricing of Corporate Credit Risk 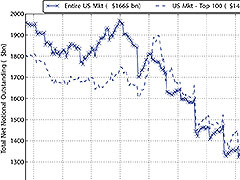 This paper uses proprietary credit default swap (CDS) data for 2010 to 2014 to show that capital fluctuations for sellers of CDS protection are an important determinant of CDS spread movements. (Working Paper no. 14-10)

Using proprietary credit default swap (CDS) data from 2010 to 2014, I show that capital fluctuations for sellers of CDS protection are an important determinant of CDS spread movements. I first establish that markets are dominated by a handful of net protection sellers, with five sellers accounting for nearly half of all net selling. In turn, a reduction in their total capital increases CDS spreads. Capital fluctuations of the largest five sellers account for over 10 percent of the time-series variation in spread changes, a significant amount given that observable firm and macroeconomic factors account for less than 17 percent of variation during this time period. I then demonstrate that the concentration of sellers creates fragility — higher concentration results in more volatile risk premiums. I also employ a number of complementary approaches to address identification, such as using the 2011 Japanese tsunami as an exogenous shock to the risk bearing capacity of CDS traders. My findings are consistent with asset pricing models with limited investment capital, but also suggest that both the level and distribution of capital are crucial for accurately describing price dynamics.