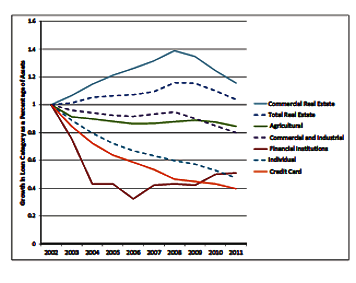 This paper investigates the design of risk weights used in setting minimum levels of regulatory capital for banks and presents a formula for regulators to set those weights by analyzing bank portfolios. (Working Paper no. 14-06)

Banking regulations set minimum levels of capital for banks. These requirements are generally formulated through a ratio of capital to risk-weighted assets. A risk-weighting scheme assigns a weight to each asset or category of assets and effectively functions as a linear constraint on a bank’s portfolio choice; it also changes the incentives for banks to hold various kinds of assets. In this paper, we investigate the design of risk weights to align regulatory and private objectives in a simple mean-variance framework for portfolio selection. By setting risk weights proportional to profitability rather than risk, the regulator can induce a bank to reduce its overall level of risk without distorting its asset mix. Because the regulator is unlikely to know the true profitability of assets, we introduce an adaptive formulation in which the regulator sets weights by observing a bank’s portfolio. The adaptive scheme converges to the same combination of weights and portfolio choice that would hold if the regulator knew the asset profitability. We also investigate other objectives, including steering banks to a target mix of assets, adding robustness, mitigating procyclicality, and reducing system-wide risk in a setting with multiple heterogeneous banks.