The repurchase agreement (repo) market is a foundational component of the U.S. financial system, providing trillions of dollars of daily funding and facilitating liquidity for U.S. Treasuries and other securities. The repo market allows participants to borrow cash against securities pledged as collateral, with an obligation to repurchase those securities in the future.i

The U.S. repo market can be divided into four major segments, depending on two factors: One, whether the trades are settled bilaterally or through a triparty custodian, and two, whether the trades are centrally cleared or non-centrally cleared. The largest of the four segments, with an estimated market size exceeding $2 trillion outstanding, is the non-centrally cleared bilateral repo (NCCBR).ii This is the only segment of the market that contains neither a central counterparty nor a triparty custodian.iii

Despite the increase in market transparency provided by the OFR’s Centrally Cleared Repo Data Collectioniv and the Federal Reserve’s collection of non-centrally cleared triparty repo, the NCCBR segment remains opaque to regulators. Even the traders who conduct business in this market have little direct visibility into the competitive landscape. Given the size and importance of this market, regulators have expressed concern over this lack of transparency.

The OFR collected NCCBR transaction-level data from these dealers for three days in June 2022. Each voluntary participant provided details on all outstanding non-centrally cleared bilateral trades conducted in the U.S., including terms of the transactions such as rate, tenor, collateral, and haircut, as well as the timing of the transactions. This blog post draws on the first day of data, collected from transactions on June 15. 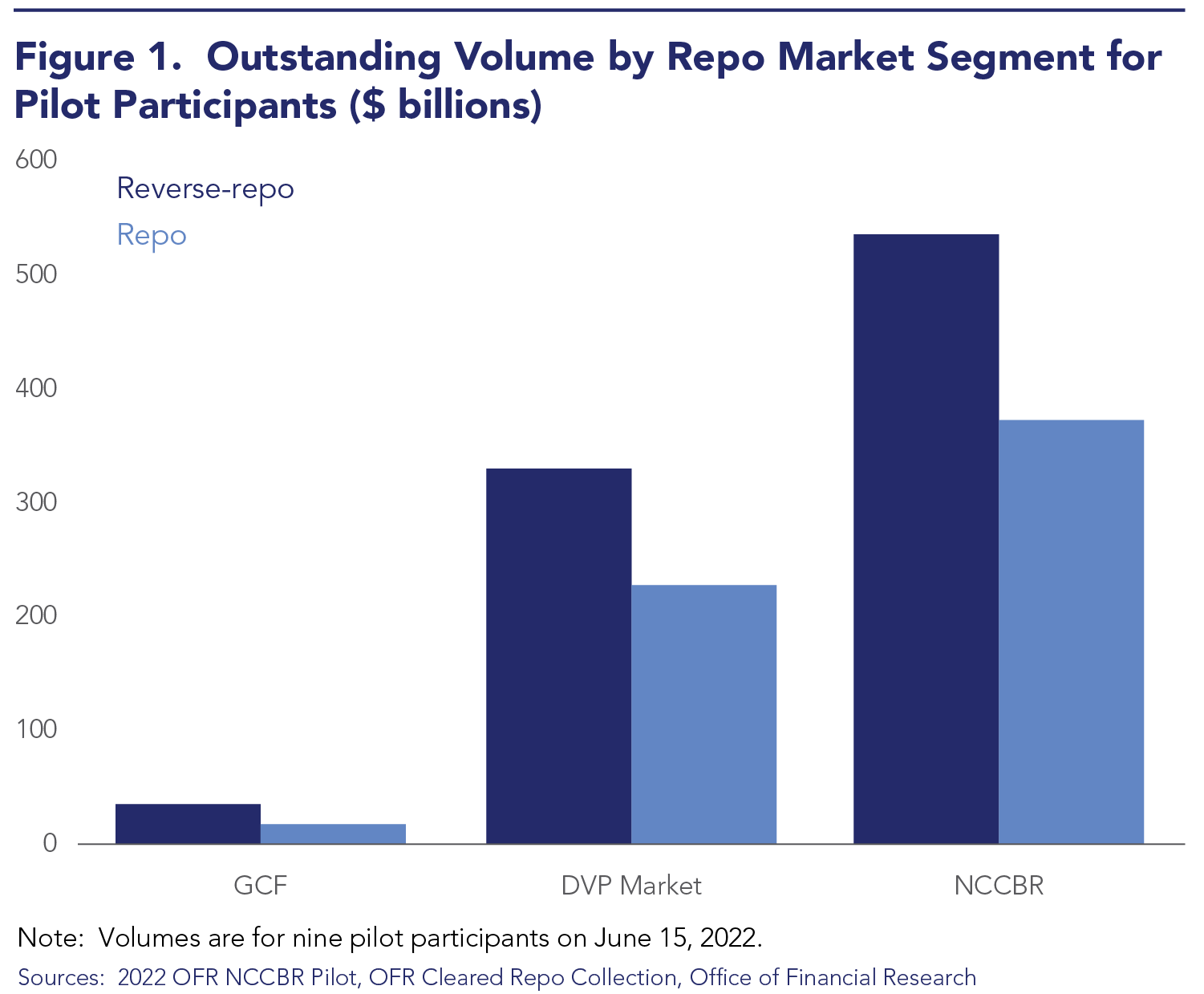 Previous work has highlighted that the NCCBR market is the largest of the four segments of the repo market. In Figure 1 we affirm this conclusion within our pilot using data on activity by the surveyed dealers across the non-centrally cleared and centrally cleared repo segments on June 15. All nine of these pilot participants, like almost all dealers, are members of FICC, and therefore able to lend and borrow in centrally cleared repo. Additionally, many borrow in triparty from banks and money market funds.

As can be seen in this figure, our pilot captured $373 billion in repo and $536 billion in reverse repo by pilot participants, which is higher than participants’ total volumes outstanding in cleared repo segments, both for their repo and reverse repo exposures. While the total size of the non-centrally cleared repo market is unknown, assuming it is roughly $2 trillionv would mean that these pilot participants make up roughly 50% of total non-centrally cleared bilateral repo.

Haircuts in NCCBR differ dramatically from what is possible through other segments: for Treasury repo in NCCBR, 74% of pilot volume was transacted with zero haircut. This differs markedly from common practices in non-centrally cleared triparty repo, where the median haircut on Treasury collateral has held consistently at 2% for over a decade, and from cleared repo, where minimum margins are typically assessed on a portfolio basis.vi Our preliminary findings, as well as outreach with market participants, suggest this may be due to the prevalence of netted packages, where a dealer will conduct both a repo and a reverse repo with the same counterparty and same tenor (usually short-term or overnight), but different pieces of Treasury collateral. In effect, these netted packages facilitate trades of one cash Treasury against another, a strategy popular with relative-value hedge funds.

Low haircuts in Treasury repo markets have been noted as a concern in the past, with the Group of Thirty report on the U.S. Treasury market observing “competitive pressures [in recent years] driving haircuts down (sometimes to zero).”vii This concern was echoed by some market participants in our outreach surrounding the pilot. However, many market participants reported that zero haircuts are considered reasonable on these trades because they feel dealers face very little risk. In particular, the credit risk on these trades is reduced since repo and reverse repo are matched; in effect, no cash needs to change hands. Nor are there balance sheet costs to the dealers since they can net the repo exposure to one counterparty against the reverse-repo exposure to that same counterparty. It is also unclear to what extent additional portfolio level risk management is conducted.

On the other hand, dealers may face basis risk, since they could lose on the difference between prices on the two pieces of collateral moving against them. In the event of default, the dealer may not receive back the collateral on the repo borrowing from the customer and may be left with the Treasury delivered to them as collateral on the repo loan from the customer. If the value of the collateral they are left with declines relative to the value of the collateral they have given up, the dealer will lose money. Since most netted packages appear to be for relatively short tenors, dealers may believe that large moves in relative prices of Treasuries are unlikely in such a short period. While higher haircuts would protect these dealers better against the possibility of an extreme move in Treasury prices, the risks that dealers take on through these trades should also be counterweighed against the liquidity and price discovery provided by these netted packages.

The OFR’s pilot provides a unique window into the non-centrally cleared bilateral repo market. The results presented here are preliminary and may be affected by the limited snapshot provided by the pilot data. In particular, more work is needed to evaluate the potential risk management and financial stability implications of the zero-haircut transactions. Going forward, the OFR plans to follow its pilot collection with a permanent collection of data from this segment of the market. This collection will gather daily data from a broader set of market participants and provide valuable insights into the shifting rates and exposures in the NCCBR segment in future years. Proposed rules expanding the cleared market may lead to volumes moving out of NCCBR, and reforms to the Treasury market may make relative value trades less attractive, while expanded issuance of Treasuries may increase volumes going through repo markets generally. Meanwhile, trades collateralized with more exotic collateral may again become more popular, driving further demand of NCCBR. The OFR’s collection of data on the NCCBR market will allow regulators to evaluate the expansion of this activity going forward and provide transparency into potential financial stability risks in this key funding market.