The OFR’s Viktoria Baklanova and Daniel Stemp, lead researchers on the MMF Monitor, attribute the shift to the Oct. 14, 2016, deadline for implementing Securities and Exchange Commission (SEC) reforms. The reforms are intended to make prime money market funds less vulnerable to runs by investors. They also are intended to limit the potential stress on the financial system if a run occurs. 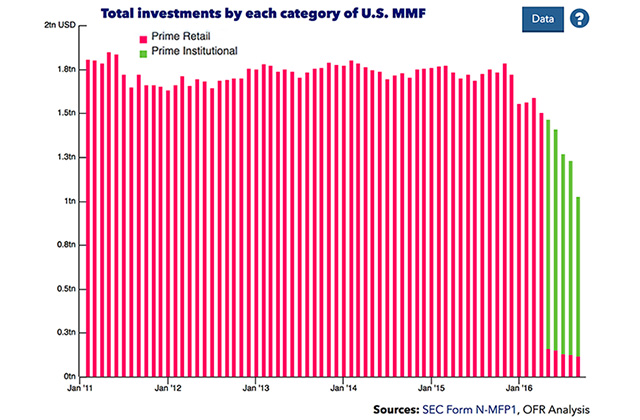 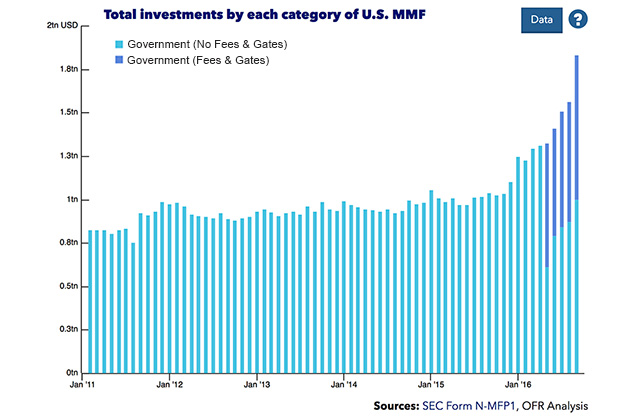 Government funds are not required to adopt liquidity fees and gates. They can continue to sell and redeem their shares at a stable net asset value.

Baklanova and Stemp also note that the sharp decline in the assets of prime money market funds is having ripple effects. For example, demand has declined for commercial paper and banks’ certificates of deposit (CDs) — traditionally common investments for prime funds.

In turn, the lower demand for commercial paper and CDs has increased banks’ expenses in raising short-term funds in the interbank market. As a result, the benchmark three-month London Interbank Offered Rate (LIBOR) has risen significantly (about 20 basis points) since early July. Historically, LIBOR has increased only during times of market stress or when the Federal Reserve tightened monetary policy.

Other debt issuers that use LIBOR as a benchmark rate are also affected. LIBOR is referenced in many corporate loans, retail mortgages, floating rate bonds, and securitized products. However, the recent increase is modest compared with the increases during the financial crisis. LIBOR and other private borrowing costs remain at the low end of historical ranges.

The OFR launched the U.S. MMF Monitor in July 2016 to help regulators and other users track money market trends. We update the data monthly with information that funds submit to the SEC on Form N-MFP.