Year In Review: The Office of Financial Research

The Office of Financial Research (OFR) capped a year of progress in promoting financial stability a few weeks ago by releasing its 2014 Annual Report to Congress, a publication that highlights our important work. 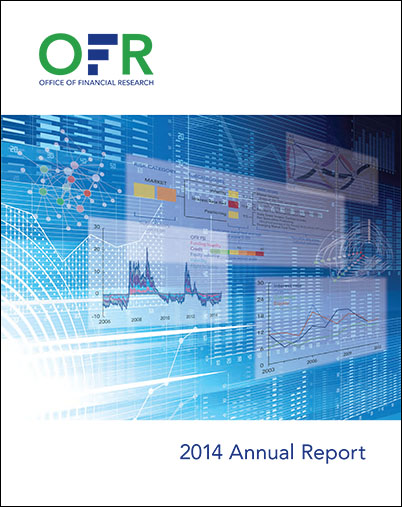 The report cites three risks to financial stability that have risen in the last year:

The report also discusses the OFR’s work to evaluate “macroprudential” policy tools designed to span individual types of financial institutions and markets to enhance the health of the entire financial system.

In addition, the report describes OFR projects to collect and standardize financial data. Our Director, Richard Berner, has pointed out that you need good analysis to make good policy and you need good data to conduct good analysis. In other words, success for the OFR begins with good data. That’s why we put such a strong focus on promoting standards to make data useful for analysis and on filling gaps in the data needed for monitoring and analysis of the financial system.

In 2014, the OFR made major progress on improving the quality and scope of financial data. We launched a pilot project with the Federal Reserve to collect data measuring the market for bilateral repurchase (or repo) agreements. A repo is essentially a collateralized loan, when one party sells a security to another party with an agreement to repurchase it later at an agreed price. Repos are an important source of short-term funding for the financial system. The U.S. repo market provides more than $3 trillion in funding every day. The bilateral repo market, where repo transactions are conducted privately between two firms, represents half of the total market. The bilateral market is not only opaque, but also vulnerable to runs and fire sales. The pilot project will make progress in filling a key gap in financial data and will improve our understanding of a short-term funding market that is instrumental in providing liquidity — the lubrication that helps to keep the global financial system operating.

We also made major strides on data standards during the year, most notably on the Legal Entity Identifier (LEI) system, which crossed the threshold from start-up to an operational state. The LEI is like a bar code for identifying entities that engage in financial market transactions. In addition, we launched a project with the Commodity Futures Trading Commission and other regulators to improve data quality in swap data repositories.

In 2014, we published nine papers in the OFR Working Paper Series, aimed at disseminating preliminary research findings of OFR researchers and their coauthors. We also launched a new Staff Discussion Paper Series and issued four of these academic-style papers by the OFR research staff on topics that are building blocks for financial stability analysis.

Stay tuned as we release our Financial Markets Monitor next year, issue a mid-year iteration of the Financial Stability Monitor, and display these monitors and other information on the OFR’s new stand-alone website to be launched early in the new year at financialresearch.gov.

Barbara Shycoff is the Chief of External Affairs at the Office of Financial Research.